The collection of the International Serigraphy Symposium Ostrava 2013 – 2021 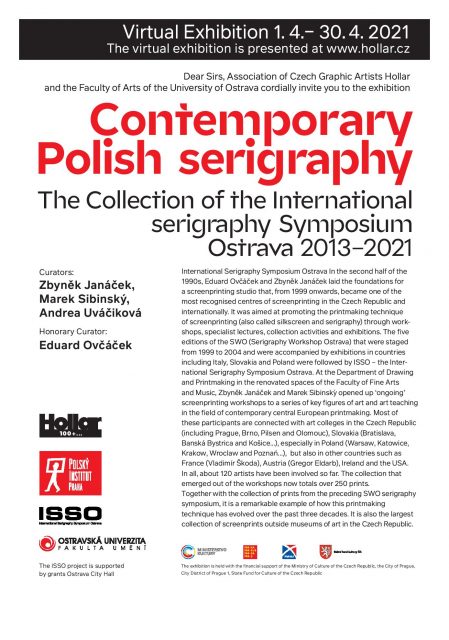 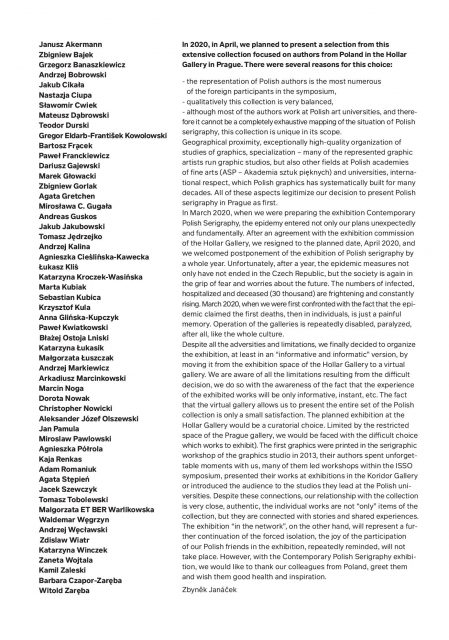 International Serigraphy Symposium Ostrava In the second half of the 1990s, Eduard Ovčáček and Zbyněk Janáček laid the foundations for a screenprinting studio that, from

1999 onwards, became one of the most recognised centres of screenprinting in the Czech Republic and internationally. It was aimed at promoting the printmaking technique

of screenprinting (also called silkscreen and serigraphy) through workshops, specialist lectures, collection activities and exhibitions. The five editions of the SWO (Serigraphy Workshop Ostrava) that were staged from 1999 to 2004 and were accompanied by exhibitions in countries including Italy, Slovakia and Poland were followed by ISSO

– the International Serigraphy Symposium Ostrava. At the Department of Drawing and Printmaking in the renovated spaces of the Faculty of Fine Arts and Music, Zbyněk Janáček and Marek Sibinský opened up ‘ongoing’ screenprinting workshops to a series of key figures of art and art teaching in the field of contemporary central European printmaking. Most of these participants are connected with art colleges in the Czech Republic (including Prague, Brno, Pilsen and Olomouc), Slovakia (Bratislava, Banská Bystrica and Košice…), especially in Poland (Warsaw, Katowice, Krakow, Wroclaw and Poznań…),  but also in other countries such as France (Vladimír Škoda), Austria (Gregor Eldarb), Ireland and the USA. In all, about 120 artists have been involved so far. The collection that emerged out of the workshops now totals over 250 prints. Together with the collection of prints from the preceding SWO serigraphy symposium, it is a remarkable example of how this printmaking technique has evolved over the past three decades. It is also the largest collection of screenprints outside museums of art in the Czech Republic.

In 2020, in April, we planned to present a selection from this extensive collection focused on authors from Poland in the Hollar Gallery in Prague. There were several reasons for this choice:

– the representation of Polish authors is the most numerous of the foreign participants in the symposium,

– qualitatively this collection is very balanced,

– although most of the authors work at Polish art universities, and therefore it cannot be a completely exhaustive mapping of the situation of Polish serigraphy, this collection is unique in its scope.

Geographical proximity, exceptionally high-quality organization of studies of graphics, specialization – many of the represented graphic artists run graphic studios, but also other fields at Polish academies of fine arts (ASP – Akademia sztuk pieknych) and universities, international respect, which Polish graphics has systematically built for many decades. All of these aspects legitimize our decision to present Polish serigraphy in Prague as first.

In March 2020, when we were preparing the exhibition Contemporary Polish Serigraphy, the epidemy entered not only our plans unexpectedly and fundamentally. After an agreement with the exhibition commission of the Hollar Gallery, we resigned to the planned date, April 2020, and we welcomed postponement of the exhibition of Polish serigraphy by a whole year. Unfortunately, after a year, the epidemic measures not only have not ended in the Czech Republic, but the society is again in the grip of fear and worries about the future. The numbers of infected, hospitalized and deceased (30 thousand) are frightening and constantly rising. March 2020, when we were first confronted with the fact that the epidemic claimed the first deaths, then in individuals, is just a painful memory. Operation of the galleries is repeatedly disabled, paralyzed, after all, like the whole culture.

Despite all the adversities and limitations, we finally decided to organize the exhibition, at least in an “informative and informatic” version, by moving it from the exhibition space of the Hollar Gallery to a virtual gallery. We are aware of all the limitations resulting from the difficult decision, we do so with the awareness of the fact that the experience of the exhibited works will be only informative, instant, etc. The fact that the virtual gallery allows us to present the entire set of the Polish collection is only a small satisfaction. The planned exhibition at the Hollar Gallery would be a curatorial choice. Limited by the restricted space of the Prague gallery, we would be faced with the difficult choice which works to exhibit). The first graphics were printed in the serigraphic workshop of the graphics studio in 2013, their authors spent unforgettable moments with us, many of them led workshops within the ISSO symposium, presented their works at exhibitions in the Koridor Gallery or introduced the audience to the studios they lead at the Polish universities. Despite these connections, our relationship with the collection is very close, authentic, the individual works are not “only” items of the collection, but they are connected with stories and shared experiences.

The exhibition “in the network”, on the other hand, will represent a further continuation of the forced isolation, the joy of the participation of our Polish friends in the exhibition, repeatedly reminded, will not take place.

However, with the Contemporary Polish Serigraphy exhibition, we would like to thank our colleagues from Poland, greet them and wish them good health and inspiration.